You are here: Home / All the other stuff / Vaping “Juuling” and Teens – What you need to know

If you are the parent of a tween or teen, I am sure you are aware of the vaping issues that face your child everyday.  You are right there in the thick of it just like our family and all the other families along with our impressionable kids that just want to fit in and be cool among their peers.

As a stay-at-home mom of three, I thought I would never have to worry about my children vaping.  I didn’t even know what vaping was until a few years ago.  My husband and I had so many talks with our kids when they were just little tots about how awful cigarettes were and how they were bad for your health.  Then, as they got a little older we had the talks about drugs and how bad they were for anyone that used them.  And, when they became middle schoolers we continued our talks and expanded the discussion into what to do if they were offered drugs.  Then, vaping became mainstream and so prevalent that when my son started high school, we had in-depth talks about vaping and all the other drugs that there are in high school and that they will in fact be offered to him.  We discussed and even told him what to say if they were offered to him.  Even with all this preparation, we have to hope that our children remember our talks and that they have the will power to say no to the people that they hang out with and sometimes look up to.

I think most all of our kids can understand why cigarettes and drugs are bad.  We have been preparing them to “Say no to drugs” since elementary school with Red Ribbon Weeks every year and we see commercials on TV about what cigarettes and drugs can do to you.  But, vaping?  We didn’t even see this one coming until just recently and now is has overtaken our youth!

You see, from our teens perspective, vaping otherwise commonly known as “Juuling,” is harmless.  The packaging is marketed towards them.  The packaging and labels look like candy and something for a child of any age.  The flavors (sour gummy worms, cotton candy, bubble gum) are a kids paradise!  They are told it’s just flavoring and water vapor and that it’s not harmful.  But, they fail to see that it still contains harmful chemicals for their developing brains and that it’s a gateway to nicotine, marijuana and then other drugs.

6 Signs your child could be vaping

In our home, we made the decision as a family to test our high schooler and if the test comes out clean then he is rewarded with money that goes into his long term savings.  He loves watching his bank account grow and we love knowing he is making the right choices.

There are inexpensive at-home drug tests that you can get to test for nicotine, THC and most drugs.  I included the links below.

Talk with your kids about vaping and be aware of what your child is doing.  Take action if you something seems a little off with your child – your instincts are probably right. 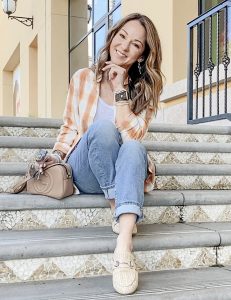